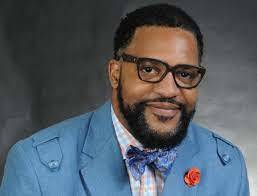 Mr. Jennings is one of five 2021 HSTW/MMGW Leadership Award Winners. District, building, and teacher leaders from HSTW NE Ohio Region member districts and schools were eligible to apply for the 2021 HSTW/MMGW Leadership Awards. Leaders were nominated by their districts or schools based on their accomplishments in implementing the High Schools That Work (HSTW) or Making Middle Grades Work (MMGW) school improvement design.

Mr. Jennings was nominated by Jeremy Batchelor, Chief of Staff, Youngstown City Schools.  Mr. Batchelor stated, “In an environment of high expectations, high support and no excuses, the team of the Youngstown City School District (YCSD) under the leadership of CEO Justin M. Jennings works to learn, lead and collaborate while using data to support each scholar in our District process. Since Justin Jennings took the helm of Youngstown City School District two years ago, community engagement has improved, and clear goals have been set with this man's guidance to help YCSD support a CULTURE OF CONTINUOUS IMPROVEMENT. It is difficult for me to choose only one of the ten HSTW/MMGW Key Practices to support his qualifications for the HSTW/MMGW 2021 Leadership Award. Justin Jennings truly has done something great. Our school district was failing and consistently received an F on the state's report card. A key trend of improvement is the overall graduation rate. If grades were being given, the 2019-2020 rate would have pushed us to a "C" overall (with our 5-year increasing to a C as well). The COVID-19 pandemic has been a challenge for our impoverished community, but thanks to Mr. Jennings, we have continued to make great strides.”

CEO Jennings appreciates the award. “I’m honored to be recognized by HSTW and humbled that our staff nominated me,” he said. “We’re working hard to improve academics at the Youngstown City School District and it’s great to have that work acknowledged. This is truly a team effort though. It takes all of us working together to make progress.”

HSTW NE Ohio Region and HSTW Ohio Network will recognize the winners of the 2021 HSTW/MMGW Leadership Awards at the HSTW/MMGW End-of-Year Reconnect and Best Practice Showcase on May 5, 2021. Diana Rogers, Regional Coordinator, and Jeremy Corbisello, Chair,  stated, “This year’s leadership award winners are well deserving and exemplify the work schools achieved by daring leaders who take on challenges, celebrate all successes, and recognize everyone who’s responsible for achieving the results.”